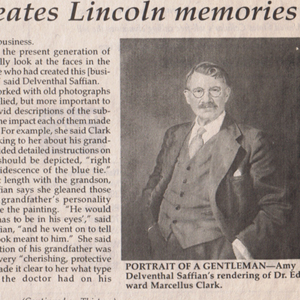 BETHLEHEM – Artist Amy Delventhal Saffian says with conviction that Dr. Edward Marcellus Clark is well known to her, even though he died some 18 years before she was born. Indeed, the portrait of the doctor, which Delventhal Saffian painted last year, seems to capture the essence of the man in such a way that one can easily imagine him, resplendent in a three-piece suit and silk tie, visiting with her for awhile at her studio each day last fall while she skillfully transfers his image to canvas.

Delventhal Saffian, in fact, came to know her subject through Dr. Clark’s 75-year old grandson, Edward M. Clark, whose parents founded Clark’s Trading Post, a landmark in town that has been a tourist destination for over 70 years.

Clark commissioned the artist last summer to paint portraits of his grandfather, mother and father, and in-laws, with the intention of creating an artistic legacy for current and future generations of the family. His plan is for all five of the recently completed paintings to be hung in the museum a the family-run business.

“He wanted the present generation of Clarks to actually look at the faces in the portraits and see who had created this (business) for them,” said Delventhal Saffian.

The artist worked with old photographs that Clark supplied, but most important to her were his vivid descriptions of the subjects’ lives and the impact each of them made on his own life. For example, she said Clark spent hours talking to her about his grandfather and provided detailed instructions on how the man should be depicted, “right down to the iridescence of the blue tie”. From talking at length with the grandson, Delventhal Saffian says she gleaned those aspects of the grandfather’s personality which dominated the painting. “He would say ‘this look has to be in his eyes’,” said Delventhal Saffian, “and he went on to tell me what that look meant to him.” She said Clark’s description of his grandfather was conveyed in a very “cherishing, protective way”, which made it clear to her what type of influence the doctor had on his grandson’s life.

Edward M. Clark, now the oldest living member of the Clark family, has a gruff demeanor which softens noticeably when he focuses on Delventhal Saffian and her artwork. When discussing the paintings, Clark talks about his desire to leave a legacy not only for family members but for visitors to Clark’s Trading Post, some of whom he said “have been coming since they were held in their parents’ arms.”

The subject of these paintings were powerful individuals, he said, who played vital roles in the success of the business. His grandfather, for example, provided desperately needed financial assistance which kept the business afloat during the Great Depression. Clark’s father, Edward Pullman Clark, was a fur trader in the early days who raised and trained Eskimo dogs. The dogs were the major attraction at Clark’s Trading Post prior to the 1950’s, when trained bears became the primary draw for tourists.

Clark’s mother, Florence Murray Clark, raised a family and helped run the business during brutal economic times. No stranger to adventure, she was the first woman to complete a legendary climb up Mount Washington with a team of Eskimo dogs, in the middle of winter.

“She was a strong, determined, liberated woman”, said Clark, “and the trip up Mount Washington was done partly to defy Joe Dodge, the head of the Pinkham Notch Camp at the time, who told the Clarks that “a woman had no business on that mountain”.

The portrait Delventhal Saffian has painted is of a young Florence Murray just out of her teens and Clark says it shows another side of her mother – the “gentleness and composure” that he remembers so well.

Delventhal Saffian has worked as a professional artist since 1991 and her accomplishments include First Place awards at the Littleton Art Show, Second Place at the Mount Washington Valley Art Association’s Winter Show, and receipt of the People’s Choice Award several times at the Lisbon Lilac Time Art Fair.

As she did with the Clark project, typically she works from photographs rather than have her subjects sit for her. But she insists on meeting her subjects personally or spending a good deal of time learning about them before she begins to paint. By doing so, she says she can”put a soul into the portrait”. The joy comes in knowing her work will be appreciated for years to come.

“Portraits tend to get front and center on the wall and are far less likely to end up in a shoebox as photographs do,” she said. “Chances are these portraits will be in people’s lives for generations, so vicariously I am part of everybody’s history.”

She works with pastels when doing portraits, and she blends the colors with her fingers. “I have tried every blending tool created and none of them gets the same effect as working with your fingers,” she explains. It is when she is doing this blending application that she feels most connected to her subject – “like a person is in the room with me.” A portrait she says, typically takes anywhere from 35 to 40 hours to complete – a sufficient amount of time, when totally focused, to come to know a person fairly well.

Amy Delventhal Saffian’s artwork is on display at the Red Coach Inn in Franconia, Sunset Hill House in Sugar Hill, and at the Woodsville Guaranty Savings Bank on Cottage Street in Littleton. 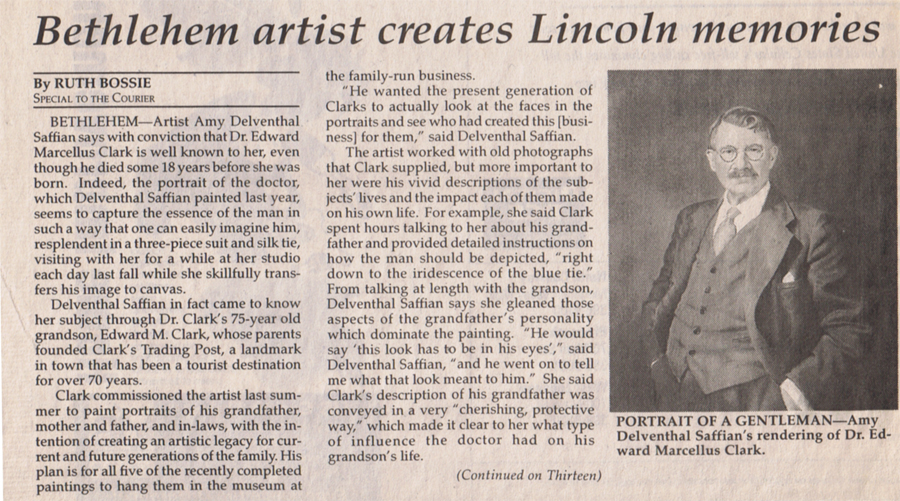 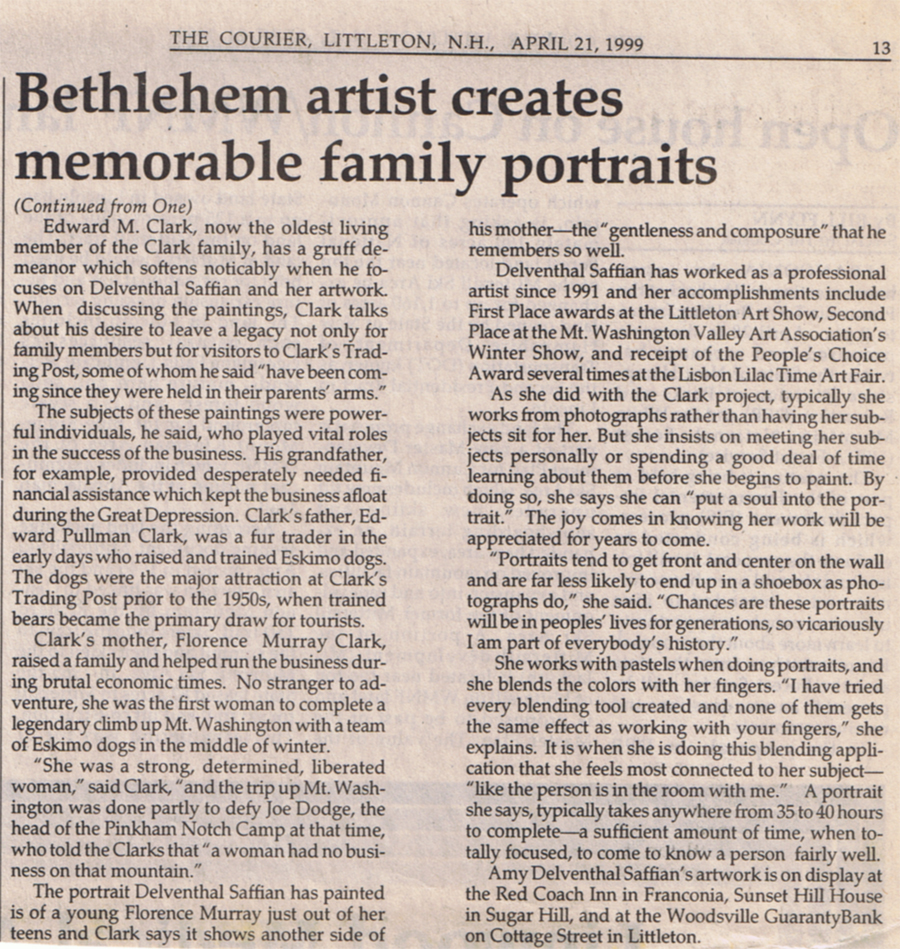